As the new semester kicks off, i would like to take some time to write about the sociopath.

This Personality Disorder is quite sad to contemplate; individuals manifesting this selfish style do more to hurt communities than people know. It can also be more than a little horrifying to learn about at first.
First, I am going to post a column from the Tampa Tribune, written after listening to Hank Earl Carr on the radio during a hostage standoff,
and talk about/dissect this case next week.
Drugs and High sensation seeking HERE
Animal abuse and sociopaths HERE 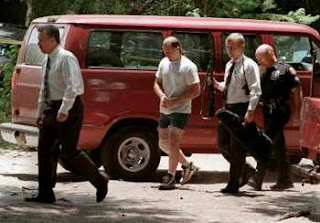 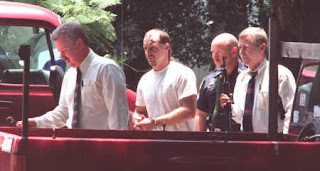 
Here is a video that discusses Hank Earl Carr's rampage.


Learn about this disorder:
go to  http://marysbeagooddogblog.blogspot.com/2010/02/sociopath-among-us-two.html

Five people are dead, including three officers, in a three-county spree of violence that started with a child's death. It started with the fatal shooting of a 4-year-old boy and exploded into a multicounty spree of violence that left two veteran police detectives, a rookie state trooper and the suspected triggerman dead Tuesday. Almost 10 hours after the boy's death, police said the man suspected of the murderous rampage died from a self-inflicted gunshot wound after officers bombarded a gasoline station he was holed up in with tear gas and explosive devices.
In a disturbing radio interview, suspected triggerman Hank Earl Carr claimed he shot the Tampa detectives after wriggling free from handcuffs. The trooper was shot to death after stopping a truck Carr had stolen after shooting the officers, police said.
Killed were Detectives Randy Bell, 44, and Rick Childers, 46, and Florida Highway Patrol Trooper James B. Crooks, 23, who had been on the job only since August. Carr, 30, claimed in the radio interview that he was angered when police called him a liar after questioning him about the shooting death of the boy, Joey Bennett, in his home. Carr claimed the boy was his son and also told police he was Joseph Lee Bennett. Neither was true.
Bennett is a 33-year-old roofer who lives in Watertown, Ohio. Reached by telephone at his home, he said he saw his children, including Joey, at Thanksgiving, when they came to visit their maternal grandmother in Marietta, Ohio.

``That was the last time I heard from them,'' he said, his voice breaking. ``I still have their Christmas presents.''

The incredible tale of violence began with Joey's death.

Police began questioning Carr Tuesday morning after he and the boy's mother brought Joey to a fire station at the corner of Nebraska Avenue and Hanna Street.
The couple pulled up to the station at 9:50 a.m. and carried in the child, who had been shot once in the head, according to Tampa Fire Rescue Capt. Bill Wade. The boy's mother, later identified as Bernice Bowen, 24, pleaded with firefighters to help him.

But Joey wasn't breathing and had no pulse, Wade said. Firefighters tried to resuscitate him; paramedics arrived and pronounced him dead.
``They hooked him up to the monitor, but there was nothing they could do,'' Wade said.
Hearing of the boy's death, Carr jumped into his car and raced back to his apartment at 709 1/2 E. Crenshaw St. Officers caught up with him there.
He and Bowen told police the child had been dragging a loaded, high-powered rifle behind him when it discharged. The account raised suspicions because Joey was shot in the head. But then something happened that made detectives even more wary.

Overall shot of standoff at SR 50 and I-75 in Hernando County.
Tampa Tribune Photo from Bob Croslin on Eagle 8
About 10:30 a.m., while detectives were talking to him, Carr bolted. With officers on his tail, he ran through several yards that border Nebraska Avenue. A few minutes into the pursuit, Cpl. Brian O'Connor spotted feet poking out from a clump of bushes along Norfolk Street, less than a quarter-mile from the couple's apartment.
Police arrested Carr there and took him to headquarters for questioning.
``We were treating this as an accidental shooting, but then all of a sudden the guy just took off,'' said police spokesman Steve Cole. ``That put a whole new perspective on our investigation. That's a little bit squirrelly.''


Cole said Carr provided different accounts of how the shooting occurred. In Carr's radio interview, he said he may have hit the butt of the rifle against the wall, causing it to discharge accidentally.
Neighbors said the apartment, one of four in a white, two-story building behind 709 E. Crenshaw St., was a constant source of loud music, gunfire and police activity.
``There was always noise over there,'' said Letha Elder, who lives across the street. ``You can imagine, but it's not for us to say.''

As she held her 5-month-old granddaughter, Elder said her heart went out to the dead child.
``I can't even feel sorry for the parents right now. I feel for that little boy,'' she said.
Former neighbors Charles Campbell and Catherine Phillips said Carr, known to them as Earl and ``Boo,'' was armed nearly all the time.
``It was like a constant thing,'' Phillips said. ``He'd carry the guns around in his pants and sit out there shooting squirrels.``
In January, they said, Carr dropped a pistol on the floor of the apartment. The gun went off, sending a bullet through the floor to a room below, but no one was injured.

Concerned about the weapons and possible abuse to Joey and his 5-year-old sister, Kayla, Campbell called the state Department of Children and Families.
Tampa Police officers react to the shooting death of two of their collegues Tuesday near the underpass of Floribraska and I-275.
Agency spokesman Tom Jones confirmed the department received two reports of problems at the household. Caseworkers visited but could not substantiate the allegations, he said.

Earlier this month, Joey's mother agreed to accept help from the department, but the agency had not finished putting the services in place, Jones said.

After questioning Carr at headquarters, the detectives took him back to his home to ``walk through'' the shooting scene. He then was placed back in the detectives' car, where - Carr said later on the radio - he wriggled free of one handcuff and grabbed a detective's gun.
He said he shot the detective who was driving and then shot the other as the man tried to dive over the front seat to grab him.

The commotion caught the attention of neighbors in Tampa Heights. Thomas Wilson, 60, ran to the front of his home as his girlfriend pointed to the Ford sedan in the middle of the Floribraska Avenue exit ramp from Interstate 275.
When Wilson reached the car, the sight behind the blood-splattered glass made him turn away. Two men lay slouched in the front seat.

``The driver was leaning against the door and the other was lying across his seat like he was reaching into the back,'' Wilson said. He knew both officers were dead.

Authorities say the triggerman then carjacked a white, 1997 Ford Ranger and headed north on I-275 toward Pasco County.

Tim Bain, a 20-year-old college student from Tampa, was on the interstate en route to his valet job at Saddlebrook resort when he saw the white truck and a state trooper whiz by about 2:30 p.m. Just south of State Road 54, he saw the trooper stop the truck at the Wesley Chapel exit.

Law enforcement personnel rush through a gas haze into the Shell station where Hank Earl Carr was found dead after going on a daylong shooting spree.

Bain said his car and others traveling onto the exit ramp stopped as the showdown took place in front of them.
A man with a rifle jumped out of the truck and walked to the cruiser, Bain said. Sitting in his parked car, Bain didn't see the shooting but heard a gunshot and glass shattering. A moment passed. Another gunshot, more splintered glass.

Then, strangely, another white pickup truck came flying past Bain onto the exit ramp and apparently tried to run down the gunman - actually clipping the gunman's truck, Bain said.

As the gunman got back in his truck and sped off, Bain jumped out of his own car and noticed the trooper's cruiser, with the passenger window shot out, rolling down the ramp.

Bain said he managed to reach into the cruiser and put it in park. But it kept moving, so he had to jump inside to slam on the brakes. ``I'll always remember his face,`` he said of Crooks, a rookie trooper. ``It was like he was looking back at me. When I had that car stopped and I looked at him, I couldn't believe it. It was like something you see in the movies.''
Bain said the trooper had been shot in the head.

As the chase headed north, Hernando County sheriff's deputies were waiting when Carr crossed the county line about 3 p.m. Officers placed a device used to puncture tires, a Stinger, across the highway. Carr ran over it.

Carr shot at and hit the sheriff's helicopter. The bullet went through the floorboard near the pilot, who wasn't injured.
It was unclear why he turned into the Shell station on State Road 50 just off I-75. But witnesses said his truck came barreling off the exit ramp and screeched to a halt in a drainage ditch beside the building.

He popped off a couple of shots as he ran into the station, witnesses said, where he took 27-year-old Stephanie Diane Kramer of Dade City hostage.

For the next 4 1/2 hours, no shots were fired. Hernando deputies negotiated with Carr. Tampa police brought Bowen, the woman he called his wife, and she spoke to him by telephone.
About 7:30 p.m., Carr released Kramer by the front door. Crouching, she ran to a line of police cruisers and was whisked away by officers.

Minutes later, Hernando sheriff's deputies fired five canisters of tear gas at the building. The Tampa police bomb squad set off two breach charges simultaneously, one against the back wall of the station and one against the side wall. The triangular-shaped charge, designed to blow holes in walls, tore a hole in the rear wall. When the gas had cleared, officers approached. They said they found Carr's body against the back of the building where the explosives went off. He had shot himself in the head, they said, though they weren't certain exactly when he died. Carr was armed with a semiautomatic assault rifle and two handguns.
One other casualty of the day's terror was a truck driver who got caught in the fray along I-75. Christopher Espinosa, 56, of Brooksville took a bullet in the shoulder while behind the wheel of a J & L Trucking Co. tractor-trailer.
Pasco County sheriff's spokesman Kevin Doll said Espinosa was one of two truckers fired upon by Carr, who was trying to get around them on I-75.
Espinosa was admitted to Oak Hill Hospital in Spring Hill. By 10:15 p.m., he was out of surgery and in stable condition, a nursing supervisor said. Further surgery, scheduled for later this week, is needed for a complete recovery.