Penn State Men in Power Sexually and Psychologically Abusing Boys: What’s Wrong With That? Sports, Evolution and “Morality” (Joey, did ya ever hang around a gymnasium?)

Superbowl adoration redux)
(Never before—maybe Gladiator Rome—have sports been so Adored.)
Modern Theories of Evolution have taught us that we are at core, soulless globs of molecule conglomerates. Yea, verily we are at the Top of the Glob Heap, complication/evolved/adaptation-wise, but globs of self-perpetuating atoms nonetheless.

Penn State Students
Rioting video
and story links click HERE
There is no “earthly” reason why a globule can not be absolutely selfish. Particularly if a huge mass of globules create a support structure, the evolved sociopath trips across the ocean of drones, spreading its seed, maintained in a solitary journey of manipulation and charm and theft and betrayal and objectification of every being—oops, soulless mass-- they encounter.

Where there are no myths such as a “Universal God” or “Good” “Evil” “Absolute” “Judgment”—the Crown Jewel of Evolution is Passing Along the Genes, Hitler is Evolution’s Genius, and Powerful Men should take whatever they want. Survival, nay, Rule of the fittest.

Sports in the Modern Day was not always Centerpieced on the Altar as it is today. There was a time when sports embodied certain “principles” which are now laughed at, scorned to shame. When KSU Football Coach Bill Snyder responded to a player being investigated for sexual assault during the Fiesta Bowl, he responded with a heart-wrenching letter to the community in which he stated that “…I do not condone any form of sexual abuse or for that matter, sexual activity for young unmarried males and females…”
That sort of expectation, of honor, of “morality” is falling away, almost gone.
Mating for life. Like the higher forms of life...
The Rule of Sports has slowly been wrested away from men like maybe your Dad—honest and filled with integrity (integrity to the point that it pissed you off when you were a teenager) (and my Dad would still be upset if he saw me use the word “pissed” –I remember playing in a softball game in junior high where a parent yelled the phrase “pissed off” and my father went over to let him know that kind of language should not--would not-- be used in front of us girls.) "Why yawanna talk like that?" he'd ask quizzically...

I remember in the blockbuster movie Airport, with Burt Lancaster and Maureen Stapleton and Jean Seberg and George Kennedy and the suave Dean Martin was having an affair with a cute stewardess, it was one of the first grown up movies I saw and my emotions were stretched by the amazing power of Van Heflin –sacrificing his life for his wife’s future… and after the movie my father processed the movie with us kids to make sure we understood that no matter how much the plot made it seem like Dean Martin should drop his loving old wife for the hot young stewardess—now pregnant—it was in fact adultery which was “Wrong” …to be avoided...don't ever do it...
Ironically,
the hilarious spoof of that movie, Airplane,
has as some of its most famous lines: a Grown Man in power
asking
an 8-10 year-old boy in the cockpit of the airplane,
“Joey, You ever been in a cockpit before?”
--No sir, I’ve never been in a plane before.--
“You ever seen a grown man naked?”
“Joey, did ya ever hang around a gymnasium?”
“Joey, do you like movies about gladiators?”
“Joey, have you ever been in a Turkish prison?” 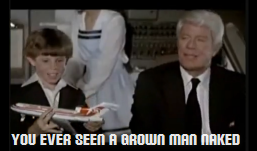 Sports is the Secret Drain. Money, Power, Influence. Desire. Access. College, Junior College, High School, Junior High School, Grade School, Kindergarten—the influence of sports curriculum is there.
The money in sports must be unimaginable—but it is the
Power that is the Prize.
Testosterone likes to have its way.
Its purpose perhaps is to take, to dominate.
The Yang without the Yin is Brute.
The Yin without the Yang is soft to the point of dissolving.

The Yang without the Yin is like the structure of the universe without its soul.
Evolution without the Spirit is doomed to selfishness –self-propagating sociopathic self-pleasing in the end. Flesh and Blood is slavishly given to indulgence; those in power actually live a “brutish life in a rather more exquisite manner…” (A. Goodier, The Meaning of Life p. 16)
If you believe in modern soulless random mathematical evolution, there is nothing “wrong” with Sandusky’s behavior. You may not like it, but it is not “wrong”
-Don’t Be So Judgey!!
Who are you to judge Sandusky, or anyone else!
If there is no such thing as absolutes, right and wrong, good and evil, sin and redemption, there is no “moral reason” that whoever is the Fittest should not take what s/he wants. As cowards they might lie to avoid “dis-grace” but will defend what they do.

The other globules may try to limit your behaviors—whatever. They may try to limit the effect of your actions on the group—ok. [Although, the sociopath provides for many many jobs in our society—so many of the helping professions—criminal response, addictions, depression, child abuse, health, traffic, family services—the list is endless. The sociopath also provides us with the life lessons of pain and suffering, the Downs that some say make our Ups so much better… yada yada.]

Why is mean, ugly, violence so en vogue? At the KSU men’s basketball game last night, during the chant where the Crowd yells, “We…Are…Wildcats!” a large section of students near me were adding a four-syllable obscenity in between, yelling at the top of their voices, “We Are The M…..F….Wildcats!” Sadness for the four children standing in front of me (always sit behind tiny peeps at a BB game…)

Why have sports become Dirtied Up, Nasty, like Territorial Pissings from angry wounded animals? Bad parenting? Video Games that teach our children to rape, murder and torture? The desire to be Gangsta, to be Badass, to be Chuck Norris but with video game heartlessness added and without the integrity of Superman.

I wish, when the other team was introduced, the Kansas State University Student Body would find clever ways to react. What if the entire crowd fell dead silent but clapped politely?
What if when KU comes to play basketball here, when each player is introduced, we all yell, “Good luck Brian!” or “Hello Jimmy!” That would do more to freak them out than yelling snotty stuff anyway.

Why did/do/will powerful successful men like Jerry Sandusky who have everything rape little boys and girls?
Why do those under or over them like Joe Paterno not report it?
Mike McQueary says he stepped in and stopped the felony-- would most people do that? What if it was not their own child?
Do you have the courage to step in? What about report to police?
Why do Kobe Bryant, Ben Roethlisberger, and thousands of others get away with rape? Why are there millions of girls and boys and women trafficked over the globe in the past decade for sexual torture, for the pleasure of grown men?
When will those who know what is going on—you and I, actually demand that something be done to stop the insanity?
(Who do we demand it to? Is all lost?)

“Man cannot leave God alone…Man is too terribly convinced of God for God not to Be or to Matter…” (A. Goodier)

So are you a hypocrite or would you call the police on your best friend of father?


The corruption, or the sadness: Why is the prosecutor who would have taken on the case missing and now declared dead?
abcnews.sandusky-investigator-center-mystery
Were children handed to large donors? businessinsider.com/2011-11-10 child-molester-madden-claims-jerry-sandusky pimped boys
Penn state post 1 here and post 2 with the grand jury testimony HERE 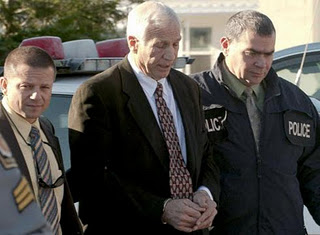 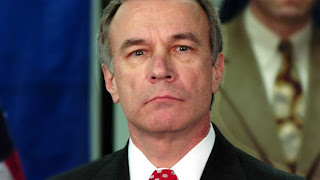 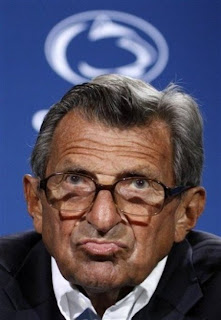 Wendy Murphy's Column  about institutional cover-up  HERE
excerpt:
"...Paterno bears some of the blame because he knew there were multiple incidents and he never did anything to protect the victims. After McQueary told him of the 2002 attack, Paterno told Penn State’s athletic director, Tim Curley, what McQueary saw, but he didn't tell police or child welfare authorities. And for reasons that remain inexplicably unclear, Paterno remained close personal friends with Sandusky after 2002 and continued to serve on the advisory board of a foundation, set up by Sandusky in 1977, to provide mentoring for boys from troubled families. The foundation gave Sandusky access to the vulnerable children he groomed for sexual victimization.
Though too late and self-serving, Paterno is the only one from Penn State thus far willing to acknowledge that he was wrong. He announced his resignation this week and was formally relieved of all coaching duties for the rest of the 2011 season amid tearful expressions of shame and guilt for not doing more. It was a good step in the right direction but Paterno’s contract was up anyway and his resignation should have no bearing on our collective willingness to hold other responsible adults accountable.

Two individuals who deserve far more blame than Paterno are Tim Curley and the university’s Vice President for business affairs (otherwise known as the risk management guy) Gary Schultz, who were told about the rape in 2002. Neither man reported the crime to outside authorities though they did take away Sandusky's keys and forbid him to bring children to the university.
Schultz and Curley now stand charged with failing to report child abuse as well as perjury for lying to the Grand Jury about what they knew. They claimed, under oath, that Paterno told them the 2002 incident involved only harmless horseplay. Paterno, by contrast, testified that he told both men the incident involved sexual abuse. The Grand Jury concluded that Curley and Schultz lied, no doubt because they found it hard to believe Paterno would have felt compelled to report to Schultz and Curley an incident involving only harmless roughhousing. It also makes no sense that if it were truly only nonsexual horseplay, school officials would have felt compelled to take Sandusky’s keys away and forbid him to bring children to campus... 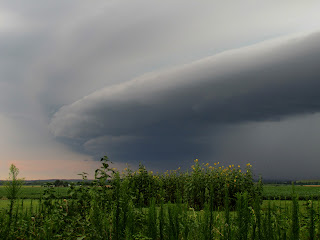