Animal Abuse, Sociopathy, Michael Vick, and Our Treatment of Animals as a Mirror of Our Hearts-Part I

I assume (poor uma) that you are "against" cruel treatment of animals.      [[If you try to find ways to explain why it is OK to force animals to fight (they like it) or to exert cruel dominion over them (I am Master) then, please put the term "sociopath" in my blog search space and read about this selfishness; 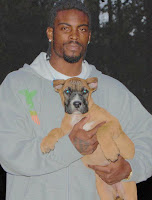 if you find it applies to you then contact a counselor, pastor, or local animal shelter and ask for some assistance in learning how to respect animals and people. (ask a friend--Does this sound like you: http://marysbeagooddogblog.blogspot.com/2010/02/sociopath-among-us-part-7-nnsd.html) ]]
SO- A Few of us have been having a discussion regarding whether--or not--people who are cruel to animals can change. Two quick data points:
1) cruelty to animals is one of--if not THE--best childhood predictor of adult sociopathy, and 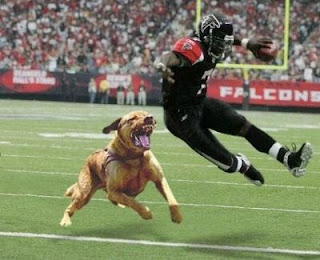 2) Adult sociopaths generally do not change--that is, they are not cured. Barring an act of God, the best one might hope for is that this disorder becomes less problematic as the individual runs out of steam during the natural aging process. A high testosterone level is one of the may factors correlated with antisocial behavior; since testosterone declines with age a decrease or at least a change in the type of antisocial behaviors over the lifespan would be expected. (note: high testosterone is also correlated with heroic and overly prosocial behaviors as well. i will put my research review Here later on which explores the factors influencing whether one's high sensation seeking tendencies (and how they were developed) are used for Good or for Evil.) (note2: sociopathy has two major factors--behavioral, like hitting, fighting, drinking, bragging--and personal, like charming, manipulating, ruminating over paranoiac fantasies. the behavioral displays would perhaps decline during aging more than the personal manifestations)
However, i believe that sociopathy, like most characteristics, descriptors, traits, and behaviors, is not a Category but a Continuum.
Example: Meanness. Most folks are not either "completely mean" or "not ever mean"; generally speaking we fall along a continuum. Some people are meaner than others; some are rarely mean; the meanness of some depend almost entirely on circumstances while the meanness of others is more internally driven. State, internal, versus situation, external.

(and by the way, most people attribute their own lousy behaviors to external reasons and their good behaviors to internal reasons, while they attribute other people's bad behaviors to internal reasons and others' good behaviors to external reasons. go figure. we seem to have a need to make ourselves better and lessen others. now there's a habit to break.)
Now,
there is a debate among researchers about many disorders, characteristics, etc. as to their "Categoriness" versus their "Continuous" nature. Example: Depression:  http://www.ncbi.nlm.nih.gov/pubmed/15709816 is naturally researched as it has great impact on our society and affects so many individuals;
and most of us do realize that we are not generally either Suicidally Depressed or Gloriously Happy. If those were our choices, it would be a Category-type characteristic.

This is not to say that there are not some folks who seem to be ENTIRELY mean or Never Depressed. Perhaps they are the ones on the very tails of the continuum.
Pregnancy--now there IS a category situation.
You are or you isn't.
Alive or Dead: Category, not Continuum.
And hunger-- right now, i am in fact hungry- but if i was to rate myself on a scale from 1 to 10, i would be about a 6 (in my limited world of being hungry--in the Sudan i am probably a big phat zero, having eaten once  this day)
So--hunger is on a continuum. BUT-- what if i was so hungry, that i could not think of anything else? Or, what if i was a mountain lion, or even lesser complexity, a shark, or perhaps a dragon fly, so hungry for mosquitoes that it was The Only Thing On My Mind? It might seem to be more of a categorical thing.
And i think that is the level that sociopathy can reach. Inflexibility in the disorder becomes so strong that the constancy and strength of the socipathic traits can make some appear to move into a category of pure socipapthy.

When the biology, the genetic material, the circumstances of life, the embryonic environment, the parental socialization, the community and cultural socialization all contribute in a large cocktail of interactive pressures, some spirits/souls/personalities/electrical collections move into really bad selfish choices, and it can become crystallized into a lifestyle and rigid personality style. This is not just true of sociopathy.

Do you know a woman who simply seems UNABLE to stop gossiping about her "friends", family, or coworkers? Do you know a guy who --no matter how much it has destroyed his life, will still choose to drink beer each and every night?  The woman may say she is kind and the guy may say he can stop drinking anytime. Why might or might not each consider asking for help or want to change?
I put this out here to introduce the exploration and dilemma of category versus continuum;
and, that as Cleckly said, "let there be no judgement where there is no compassion."

Back to Animal Cruelty.
Agreeing that cruelty to animals is a Bad Thing, and that we would like to do whatever possible to end it- and hopefully, learn whatever we can from studying the dynamics of it to also find ways to influence the sociopathic person in other areas--i first ask,

What can allow a person to enjoy, let alone sponsor such a spectacle as animals in pain?
Warning:
below

Beautiful Gypsy Now
is a
terrible picture of Gypsy.
(you can click on any pic on this blog to enlarge it.) 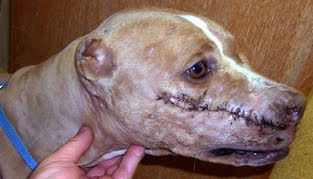 She is now a poster dog
for recovery and rescue.
You can read her Good Stuff
here: http://animom.tripod.com/dogs.html 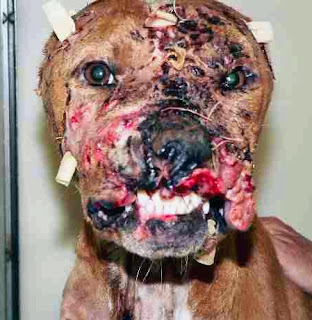 Gypsy, Forced into Dog Fighting
How
does one move into this, can one move out?
Even many hardened criminals hate this behavior. (Example: There was a case here in Liberty, Missouri, of a man [ Charles C. Benoit] who
Pain Warning
was arrested

for stomping on and grilling a kitten. I will not dwell on the rollercoaster of searing emotions myself and others experienced during the news cycle of this crime; (read here and HERE is a comprehensive archive of similar crimes that will drive you to the brink. Do not go here unless you need proof for some reason) The facts:  a dozen people gathered around a barbecue grill at some apartments where the kitten was being burned alive on hot coals. According to the rescuing woman, the crowd cheered and shouted while torturing the kitten. They then jeered her attempts to stop them until she threaten to call the police [which dispersed the crowd].

She pulled the kitten from the grill, burning her own hand, and tried to treat and feed the kitten until she could go to a vet. Due to the severity of the injuries, the kitten was euthanized. The woman has since received death threats. The details in the police report are obscene. The public outcry was so great that even men in prison asked for those arrested in the crime to be sent to them so that "justice" could be served. Even the judge in the case commented on the fact that those arrested were at risk from other imprisoned individuals. (The charges were later dropped!)

One case of animal cruelty which has enough background to examine is the Michael Vick case. The Michael Vick and Friends Arrest and Conviction is an interesting case: More donations, computer traffic, computer crashes at shelters, etc. occurred due to the notoriety he gave this case than at any previous time.
Nationally, People were very angry at Michael Vick and his Cohorts. You can read about the details of his operation, the defendants, the deals cut, etc. and the public
OUTRAGE :
http://www.scrippsnews.com/node/25460
http://sports.espn.go.com/nfl/news/story?id=2884063
http://en.wikipedia.org/wiki/Bad_Newz_Kennels_dog_fighting_investigation

I did read the legal documents; the evidence,
the descriptions of how the dogs were mistreated and tortured and killed were nightmarish. you can get a glimpse HERE.

Two issues arise for me.
But First i will post some pics below,
and in the next post will take up where this left off. 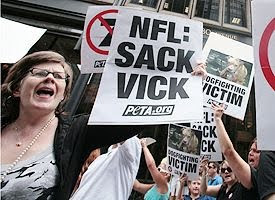 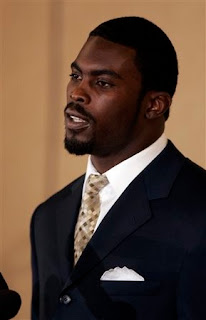 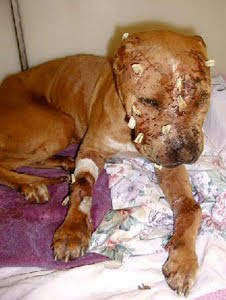 Gypsy Girl before leg was removed. 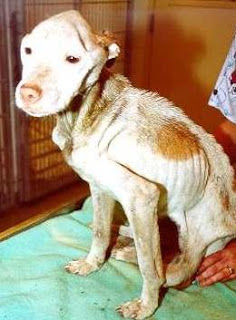