"A dog in northern Australia recently surprised his owner by stealing his motor home and driving it through the streets of Darwin. 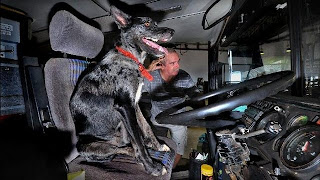 The canine-piloted camper made it a couple-hundred yards, crossing a thoroughfare and jumping up on the sidewalk before a local man spotted the pooch — sitting in the driver's seat with its paws on the steering wheel — and chased it down. He caught up with it, jumped in and hit the brakes. It was just about to hit a parked car.

And it's not unlikely to happen again — somewhere else. Research from the University of Vienna found some dogs engage in "automatic imitation," mimicking their owners' gestures and hand movements. In this case the dog, a two-year-old German Koolie — a distant cousin of the Border Collie — named Woodley, copied his master by releasing the dashboard-mounted handbrake, putting paws to tiller and hitting the streets..."
more: http://jalopnik.com/5861884/this-dog-took-his-owners-motor-home-for-a-drive
Posted by Katy at 9:45:00 PM