Across the country, women are writing about rape, rapists, and society.
This crime is not going away or lessening.
People send me items every day.
here is one sent by a K-Stater, connected with the New York Times:

the Ask Amy advice column,
http://jezebel.com/5414393/ask-amy-to-rape-victim-first-you-were-a-victim-of-your-own-awful-judgment
an advice columnist blames a victim for getting assaulted.
here is one comment posted after the "advice':

"Now, I'm not blaming the rapist or anything, but he did make several HUGE mistakes that night that could have decreased his chances of raping someone. First, he went to a party, where he knew there were going to be women who had been drinking. Second, he led one of those women to believe that he wouldn't rape her, and last, once he was alone with her he chose to go against her wishes and raped her anyway.

It's only natural for young women to go out and get drunk at parties; you'll never be able to stop all of them. So it's very bad judgment for any man to go to a party if he thinks he might be capable of raping someone while there. We need to focus on teaching men what they can do to avoid assaulting anyone.
I know it's hard to tell young men that all women are potential victims and that therefore they should stay away from all of them, but that's the price you have to pay to stay safe. Most women out there are perfectly capable of taking care of themselves, but it's the few who might be led to trust you that you have to watch out for. Since there is no way to distinguish between the women who won't and the women who will trust you, you just need to avoid them all.
I understand that believing there was nothing he could have done can help a rapist to feel better about himself; the fact is, that if he'd taken better precautions, he could have walked away a non-rapist.

1) Stop bathing. Rapists don't like natural odours.
2) Deliberately contract STDs with obvious physical symptoms. Don't treat them. No one likes the herp! That'll keep them away.
3) Wear sweatpants, at all times - preferably several pairs at once. You're asking for it only wearing one layer - don't make it so easy for them. (use this in conjunction with no. 1, so that the sweatpants are fragrant).......6) Don't leave the house, and lock the doors. Once you go out in public, your body is fair game. Be safe!
7) Get rid of your vagina. Ask your doctor. 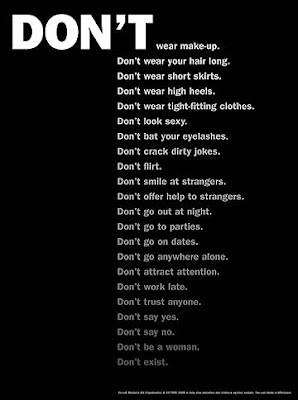