I went by the animal shelter to drop something off. A young man was there with two dogs he had cared for for a few days--they had showed up at his house near Dwight Kansas and they were clearly mates. They were so funny, affectionate, happy, healthy, smart, playful and wonderful. They moved in amazing unison. They were one. I almost took them there and then although that would have been Impetuous and perhaps unwise. While we were admiring them the shelter folk came and started to process them. So now i will pay to take them, if it is in the cards.

The man is leaving for iraq in one week and his wife could not take the responsibility to raise them. I thank them for doing the right and compassionate thing. The shelter folk once told me that a vehicle drove by and without stopping, tossed an animal out the window and sped away. Sadness.
So- these two dogs should stay together. They are so appealing i may decide to expand the guard unit and add them to the fold. Thunderpaws Tribe! Look at the size of the paws on the pointery looking one--
short video: (http://www.youtube.com/watch?v=AwdbE_Hixv4  ) .
the shelter expert said they looked/acted like they were littermates-- indicated a pointer/mastiff/bull mix. 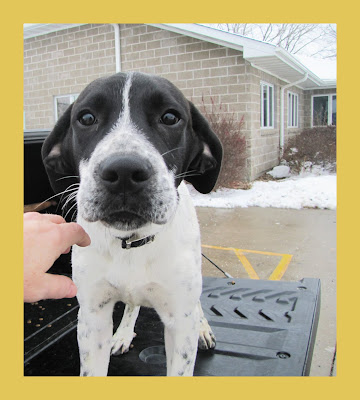 Mastiff pointer mix
update: these two were adopted separately
within one hour after they were available for adoption.
it is a great sadness, a lesson for me
that i missed out on these wonderful animals.
the worst of of it is that
they were taken from each other.
what a pair they were. they would have been two huge wonderful dogs,
acccording to the vet, a mastiff/pointer mix.
seize the day, fool.
this is burning into my brain.
click HERE for some nice mastiff pics.