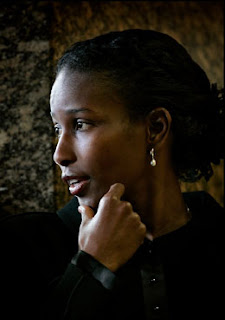 Maria Bartiromo (HERE) is a financial journalist who, this Sunday (December 5, 2010) interviewed Ayaan Hirsi Ali, -an author and activist in the struggle to protect women’s rights from militant Islam. Ayaan stated that it is as a wolf in sheep's clothing, or under the so called nonviolent measures under a Muslim Brotherhood of bringing Sharia Law to the international community, that women are most at risk. She teaches that Islam is "not just a religion"-- read more HERE.

"Ayaan Hirsi Ali was born in Somalia and raised a devout Muslim. In 1992, Ayaan was married off by her father in a ceremony which she refused to attend. In order to escape this marriage, she fled to the Netherlands where she was given asylum, and eventually citizenship. After earning a degree in political science at the University of Leiden, she served as an elected member of the Dutch parliament for three years.

She has since become an active critic of fundamentalist Islam, an advocate for women's rights and a leader in the campaign to reform Islam. Her willingness to speak out and her abandonment of the Muslim faith as currently defined have made her a target for violence and threats of death by Islamic extremists.

Ms. Hirsi Ali was named one of TIME magazine's ''100 Most Influential People'' of 2005, one of Glamour Magazine's Heroes of 2005, and she received the Prix Simone de Beauvoir in 2008. She has published a collection of essays entitled The Caged Virgin (Free Press, 2006) and a best-selling memoir Infidel (Free Press, 2007). She is now a resident scholar at the American Enterprise Institute, Washington, DC."


From her foundation:
"WHAT DO WE KNOW? Click here to download facts and figures on the circumstances affecting Muslim girls and women in the United States."

Here is an excerpt from the foundation website:
Parts of the code of Shari'a or Islamic law that apply to the family are practiced in many Western countries including the U.S. In the United States, too, there is a lobby of Muslim organizations - not yet as strong as the lobby in the UK - that seeks to have Shari'a family law implemented through the arbitration system.
Here are some examples of practices that limit the rights and freedoms of women:

•Forced Marriages: Sometimes described as an "arranged marriage". The difference is not always clear, depending on how much pressure is put on the girl to accept the arrangement. Sometimes, however, girls take steps to avoid the marriage or get out of it. Resistance to this sort of marriage very often leads to severe beatings and the punishment can go as far as to lead to an "honor" killing.

•Forbidden Divorces: Some wives, after suffering a great deal of abuse at the hands of their husbands, seek divorce and find as obstacles in their way not only the husbands they want to leave but enraged fathers and brothers and even in-laws that prevent them from seeking or obtaining a divorce. Many women in this category also often become victims of beatings and, in the worst cases, honor killings.

•Loss of Child Custody by the Mother: In many divorce cases the mother is no longer allowed to have custody of her child after the age of seven. Many western ex-wives of Muslim men find themselves in this position.

•Concept of Guardianship: This is the idea that a woman must always have a male guardian from whom she needs permission for all her activities. This ranges from asking permission to leave the house to seeking permission to sign contracts, accept jobs, etc. This concept applies to all women, and the legal age of maturity in the West is not recognized.

•House Arrest (see also guardianship): Girls and women who are seen to be too liberal or westernized are forbidden to go out of the house without a male escort; resistance to this often leads to punishment and, in the worst cases, to an "honor" killing.

•Domestic Slaves: The concept of domestic slaves refers to girls as young as 10 or 11 years who work as housemaids and are not paid for their labor. These girls do not go to school. They are often orphans; their only family often consists of relatives who abuse them. Sometimes they are illegal immigrants.

•Female Genital Mutilation: This practice is often inflicted upon girls between the ages of 4 and 14. Many Muslims argue that the practice has nothing to do with Islam. Female genital mutilation is not in the Koran, but it is included in a Hadith (a saying of the prophet) that is controversial. The fact is, in the West, Muslim communities are almost the only ones that practice it. It is to ensure virginity until the girl's wedding day. The ritual may not be Islamic, but it serves the Islamic purpose of ensuring that a girl remains a virgin till she is married.

•Polygamy: Polygamy is a part of Shari'a law. Those men who practice it may have one civil marriage and, in addition, two or three Shari'a marriages. In the UK, a number of these polygamous marriages are "legally recognized".

•Honor Beatings: This is a beating of a girl or a woman for refusing to comply with the family code of honor and engaging in behavior deemed by the family to be shameful. Ignoring the rules of house-arrest; resisting a forced marriage; seeking a divorce; dating; dressing in western attire; wearing make-up; or simply taking non-Muslims as friends; these and a whole series of activities are seen as an invitation to be beaten. The beatings are intended to be corrective. If the girl complies, normally punishment ceases.

•Honor Killings: Sometimes a beating ends up in murder because the perpetrator goes too far. Honor-killings are mostly pre-meditated, however, and are often carried out with the knowledge and help of a number of family members and other relatives. When the corrective beatings fail to dissuade a girl/woman from complying with the wishes of her family or giving up the behavior they consider shameful, the family may conclude that the only way they can regain the 'honor' lost through the girl's 'shameful' behavior is to kill her. The plotting can take days, weeks, months and even years.

•Deportations/Kidnapping: Some families or husbands will not go so far as to kill a disobedient daughter or wife. Instead they trick her into going back 'home' (native country) on vacation; then they confiscate her passport and force her into marriage or whatever it is they want her to do. Some families prefer to take a disobedient girl to the country of origin and kill her there, as they can escape punishment for the murder or get a low prison sentence for their action.

The practices described above can be divided into two sets. In one set, the purpose of the activities is to induce the girl/woman to obey - for instance, to accept marriage to a stranger.
The other set contains activities (often violent) that are intended as a deterrent - that is, to stop the victim from behaving in a certain way. Some forms of violence against a victim - for example, honor killings - have a greater impact on all the girls in the community. A beheading like the one that recently occurred in Buffalo, NY, has the consequence of deterring other women in that community from seeking a divorce or otherwise breaking the family code. Many women become so afraid that they are unable to organize resistance.

It is not always physical violence. Sometime, other forms of coercion are used to induce women/girls to comply. Some examples of that are:

•Confinement: this is more than house arrest. Girls are locked up in a bedroom or basement; sometimes they are tied up or chained

•The threat of being disowned

What makes this type of violence different from the 'regular' domestic violence?
•It is violence against women based on a centuries-old legal code;

•The perpetrators do not believe that they are committing a crime and justify their actions in the name of religion;

•The perpetrator has the support of his family and often the victim's family too;

•Some of these practices are seen as valuable and passed on to the next generation; and

•There is a movement in the West that seeks to legalize some of these practices on religious grounds.

In the West, most people see violence, in general, as a crime. Domestic violence is viewed not only as crime, but also as pathological behavior. Perpetrators of domestic violence do not enjoy the support of their families or community; they may be sent to jail, and after they have completed their jail terms, or within the prison, they may be 'treated' in some way. In other words, effort is put into teaching them not to be violent and to cease engaging in such behavior. Honor and shame in the West have a different meaning from the tribal Islamic one: Honor and shame in the West are normally not collective, and the individual who engages in violence is expected to be ashamed of himself. In the West, no amount of shame or lost honor is deemed to justify capital punishment such as that of an 'honor-killing'. The victim of violence in the West is normally treated with kindness and given as much support as possible. This normative difference is crucial. "


We all need to clean up our own houses.
Much inequality and unfairness, violence, crazy stuff! has been accepted under the name of religion, or under the pressures of various groups, movements, and ideologies.
Our house is now a global house.
Get educated!
You can see more about how this issue is being debated by the left and right in the USA by taking a look at this review: Excerpt below.
"The Flight of the Intellectuals, Paul Berman's new 300-page polemic (to be published this spring), recalls these heady days in a book that is likely to provoke an intense controversy among public intellectuals. The most contentious assertion in Berman's book is that some of the most prominent of these—people who rushed to the defense of Salman Rushdie when he was threatened with death for a novel deemed blasphemously irreverent to Islam—have failed to offer wholehearted support to Muslim dissidents today, people such as Ayaan Hirsi Ali, the Somali-born author and Muslim apostate, whose lives are similarly threatened. This failure, this "flight of the intellectuals," Berman argues, represents a deeply troubling abandonment of Enlightenment values in the face of recurrent threats to freedom of expression.

Berman's book will likely provoke bouts of rage, praise, and condemnation in print and online. In doing so, his book will remind us that those old Partisan Review smack-downs raised questions that have evolved and mutated but remain unresolved: Is there a paradox at the heart of Enlightenment values? Should a belief in "tolerance" extend to the intolerant? Must Enlightenment values stop short of challenging multicultural values? Or do multicultural values sometimes entail moral relativism? One key issue, for instance, is whether Ayaan Hirsi Ali's campaign against female genital mutilation makes her—as the intellectuals Berman attacks have called her—an "Enlightenment fundamentalist," the flashpoint buzz phrase of the controversy. (Although my favorite buzz phrase is the one the French intellectual Pascal Bruckner devised for those who have sneered at Ayaan Hirsi Ali: "The racism of the anti-racists.")"