Animal abuse and abuse of dogs is a malignant thing. (READ MORE HERE and HERE)
Patrick: Picture, full story HERE  excerpt: "Everyone thought that, you bring in an animal like that, that looks like it's really just a corpse, you put it to sleep," Smillie-Scavelli said. "But of course, he looked up at you with those eyes, and you say: How can you give up on this dog? How can you, when he's not giving up on life? So, we gave him that second chance, and he has just run with it, and thrived."

When this first came out i decided too sad to post.
but something pulled me
from the vet's quote.
after a couple days i decided
to experience Patrick 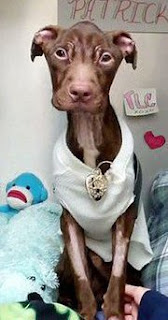 "This is not a month of starvation," Thomas Scavelli said. "This is a lifetime probably, or at least months and months of neglect, and to see the way he cares for people and trusts people, that's really been the most interesting and rewarding thing to see about the canine spirit."...
Kisha Curtis of Newark was charged with two fourth-degree offenses for "tormenting and torturing" an animal by failing to provide food and water, prosecutors said. The charges could carry a maximum jail sentence of 18 months and a fine of up to $10,000. She also faces two abandonment charges punishable by up to six months in jail with a $1,000 fine....

Authorities said Curtis tied the dog to a railing in her Newark apartment building and left the state for more than a week. A janitor later found the emaciated dog in a trash bin.

You all know how I've written much about creature abuse, and shall not revisit it now.


More about abuse and healing of dogs HERE
Posted by Katy at 3:36:00 PM