War Horse, (A Play with Puppets) and Respect for Those with No Choice

Startlingly real puppets of horses, (Video HERE)  made by two men from South Africa, may be the hook that entices one into (adapted for stage by Nick Stafford) the story, WAR HORSE by children's writer Michael Morpurgo. More about the play here.

The story:
Wiki say: "In Devon at the outbreak of World War I, Joey, young Albert Narracott's beloved horse, is sold to the cavalry and shipped to France. Joey serves in the British and German Armies, befriends Topthorn (another army horse) and gets caught up in enemy fire; death, disease and fate take him on an extraordinary odyssey, serving on both sides before finding himself alone in No Man's Land. But Albert cannot forget Joey, and, still not old enough to enlist in the army, he embarks on a dangerous mission to find him and bring him home to Devon..."

CBS Sunday Morning Show had a spot about the stunning "puppets" of horses used in the play. You MUST watch some video (below) of this.
Also, the bit speaks to the staggering loss of life in WWI and American Civil War --of horses, who "had no choice".. excerpt: " World War I was the turning point, when tanks became the war horses of the 20th century. And even though the tank on stage is made of aluminum and plastic, and the horse is a puppet, we comprehend what a terrible turning point it was...
"Tanks, I mean, they simply rolled over people, and they rolled through wire, and they obliterated
horses," said author Michael Morpurgo. "And it was that clash, then, of flesh and metal, of the machine and humankind, really, and we saw it with our own eyes, really, that this is the horrible future." 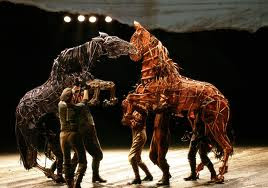 ..."Their plight was total innocence. They were simply being used, exploited, for cavalry and for pulling ambulances, for pulling guns, they were simply being used and sacrificed."The numbers are staggering: Ten million soldiers died in WWI, and it's believed about the same number of horses.
The story of "War Horse" is actually two stories - one about horses, the other about the extraordinary puppets that seem like living, breathing, feeling creatures on the stage. They were created by South Africans Adrian Kohler and Basil Jones..."
Morpurgo's novel, "War Horse," is the National Theatre of Great Britain's most successful production ever, and opens this week at New York's Lincoln Center. 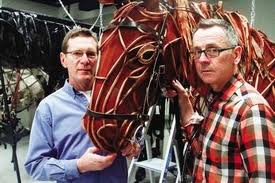 “He possessed beauty without vanity, strength without insolence; courage without ferocity; and all the virtues of man without his vices”  Lord Byron