Tip of the Spear video below--    "SEAL Team Six, the elite military operatives who killed Osama bin Laden in Abbottabad, Pakistan on Sunday night, were accompanied by one canine companion"
Here is the story and video:
http://abcnews.go.com/US/osama-bin-laden-raid-navy-seals-military-dog/story?id=13535070

((although, why publicize this so much? their secrecy is their strength. a.) politics))
what caught my interest was that in the beginning, during the intense training for these Best Dogs
--if they broke a tooth it was replaced with TITANIUM.
Titaniam Canines, what a Rock band. 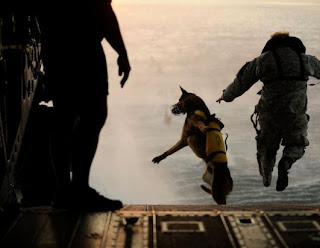 this dog shames me and my friends.
click to enlarge 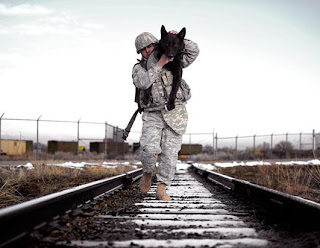 They can bite through kevlar! story stated:
"The dogs are a fighting force on four legs that are able to parachute into action, rappel into combat and swim into a skirmish. They are outfitted with protective body armor and a powerful bite. According to the U.S. Air Force, the bite from a German shepherd, one of the breeds used by the military, has a force between 400 and 700 pounds..." 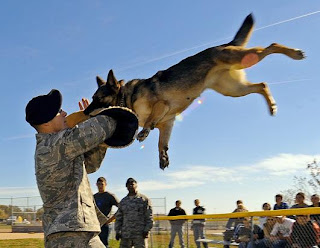 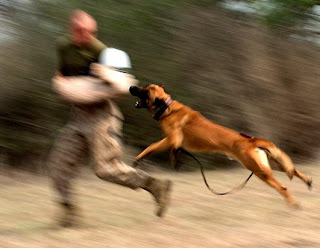 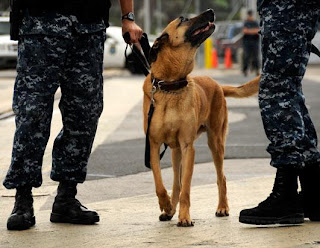 ..."Last year, at a cost of more than $20,000 per unit, the SEALs bought four tactical vests for their dogs, according to The New York Times. The vests are reported to have infrared and night-vision cameras that allow handlers to use a monitor from up to 1,000 yards away to see what the dog sees. The handler is also able to communicate with the dog through a speaker on the vest. ..."
Here's the thing: now it seems

the local urban dogs in country are getting this gear however they can,

off the black market, vests and doggles,   to look "combat."  My dog can rock that look. 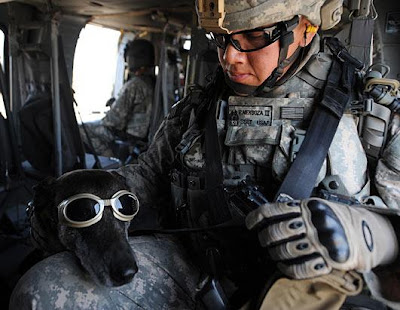 TheMouseandSpark in another life...
This video from military.com is about a Coast Guard Canine Explosives Dog.
The Story of  Bomb-sniffing Dog
Theo and Corporal Liam Tasker
HERE
August 6 update:
Sadness in Afghanistan August 2011.story  HERE
Posted by Katy at 7:06:00 PM